Tales of the Cocktail: A Reflection

The blogosphere is still a-buzz with tales of Tales of the Cocktail and I must admit I can’t take my mind off it. Since I’m having trouble consolidating and organizing these random thoughts and memories, I thought I’d just throw them all out there. Rick of Kaiser Penguin has already done something very similar with his “Lessons Learned” from Tales of the Cocktail (check it out, it’s hilarious!), so I apologize if I seem like a copycat, but I feel this is the best way of communicating my thoughts. Here goes: 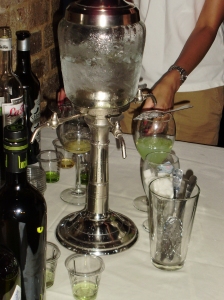 Last day in New Orleans! I took a break from drinking (believe it or not) to go on an Airboat Swamp Tour. About thirty minutes outside of New Orleans I was able to soak up the sun and see the sights, which included swampy waterways and several alligators.

For the third time, Steve & I attempted to visit the Napoleon House for lunch, but once again it was closed! We’ll have to put it on the list for next year’s adventures. Instead we grabbed a couple Moufalettas and I did a little shopping before heading out to the Wormwood Society Absinthe Soiree.

The Soiree was a great time. It was held at Muriel’s and featured small dimly-lit lounges with absinthe fountains throughout. Attendees included everyone from Gwydion Stone  to Paul Clarke to local absinthe enthusiasts. It was the perfect celebration to end my week in New Orleans. I’m already planning for next year…

Started the day with the best meal I’ve had in New Orleans thus far—breakfast at Brennan’s. Strawberries and Cream, Eggs Portuguese, and Bananas Foster (it’s more dessert than breakfast but it’s delicious!). To top it off, Steve & I enjoyed some great conversation with our guest, Darcy O’Neil who, just like all the other bloggers I was fortunate to meet, was extremely friendly and charming in person.

Next, I made my way over to the “Regional Trends” session with Camper English (though I was late thanks to a lack of elevators!). Took a picture of a lovely cocktail—the Fraser River Sour.

Lunch was at Bourbon House with Gabriel Szaszko, his wife Joana, Steve, and Cort Kinker (of Hiram Walker). Once again, I enjoyed excellent conversation about cocktails, blogging, and New Orleans with some of the nicest people I’ve met.

I was probably still full from lunch when I met Jay Hepburn, Jeffrey Morgenthaler, and Steve for dinner at the world-famous Arnaud’s. I got so swept up in the conversation (about drinks, Tales, blogs, and for awhile there, Annie Hall—Jeff, I swear I’ll see it soon!) that I neglected to comment on the fact that the food was amazing!

After dinner, took a cab over to Harrah’s for the Spirit Awards hosted by Shooter McGavin (Happy Gilmore fans, anyone?). I was impressed by the venue, which featured a “winner’s circle” bar on stage. Nominees and winners were from all over the world and received lots of love from the lively (and probably tipsy) crowd. Just another night in The Big Easy!

Started off the day with a little breakfast at Cafe Beignets before heading over to the Monteleone. Then it was back-to-back sessions for the day starting with Absinthe “Cocktails with a Kick.”

Next was “History of Liqueurs and Cordials” which featured some delicious cocktails and great insight into where the category has been and where it’s headed.

Took a couple laps in the Pernod Ricard tasting room next. The new Hiram Walker products were out including the Gingerbread flavor that will be available soon. To go along with the French theme of the tasting room, they had crepe chefs fixing up delicious treats. But after waiting in line for 15 minutes and being cut by a few guys (chivalry is definetely dead!) I gave up on that dream and headed to the long-awaited Sensory Perception session.

I found out I’m a Super-Taster which basically means most things taste awful to me! No, really, it just means my taste buds are more receptive to flavors, which explains why I can’t stand spicy food, coffee, grapefruit juice, or tonic water. Now, when people call me difficult I can just say I have superior tasting abilities that they wouldn’t understand!

After taking a cab out to the famous Willie Mae’s Scotch House and finding it closed (Damn!), Steve & I headed back to the French Quarter for a tasty dinner at K Paul’s. Took a stroll down Bourbon (yikes!) before calling it a night. 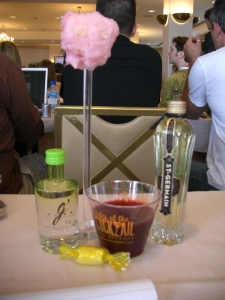 Yesterday was fantastic. I started off with the Molecular Mixology session led by Jamie Boudreau. It was like Halloween for alcoholics-several boozey sweets were handed out and they were delicious! I was worried about where to grab lunch since I don’t do seafood or spicy (I know, I’m in the wrong town), but ended up really enjoying some red beans and rice. I was wowed by Tony Abou-Ganim at the Latino Libations session where I got to talking with a few mixologists from Southern Wine & Spirits. After wandering around the French Quarter, Steve & I landed at the Palace Cafe for a Spirited Dinner with Bar Chefs Paul Clarke (of Cocktail Chronicles) and Jim Meehan (of New York’s PDT). The drinks were like nothing I’d tasted before (I especially enjoyed the Canton Collins) and the Cumin-Crusted Wild Boar was excellent. Finished up the evening at Muriel’s for the Beefeater Jubilee, sipping punch on the verrendah overlooking Jackson Square. Ready for a new day & looking forward to Sensory Perception with Darcy O’Neil this afternoon.

After a long day of travel I’ve finally made it to New Orleans! Started off with a great professional series headed-up by Lauren Clark of DrinkBoston.com. After checking in at my hotel I made my way down to the “Reviving Absinthe” event which was packed with eager Absinthe-tasters. After melting into a puddle of sweat while walking the streets of this steamy city, I had a bite at the Beefeater Welcome Reception and decided to call it a night. I’m going to need a good night’s sleep if I’m going to keep up with New Orleans! 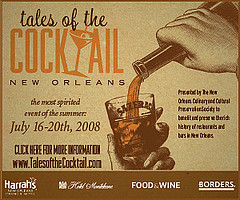 Tomorrow I’m headed to The Big Easy where I will be boozing and schmoozing at the “Tales of the Cocktail” festival till next Monday. Check in often—I hope to be sharing all my experiences by updating here frequently. Always the control freak, I’ve assembled a detailed agenda (which will probably get thrown in the trash once I get there and get pulled in a million different wonderful directions). Here’s what’s on the list (for now anyway):

2:30- Professional Session: How to Get Your City, Bar, Recipe, or Bartender More Media Coverage

2:30- The Scented Trail: Techniques on How to Develop Aroma in Your Cocktails

12:30- Cocktails with a Kick-Absinthe Returns to America

2:30- History of Liqueurs and Cordials 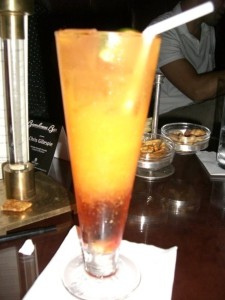 My final stop in New York was at a Manhattan landmark—The Carlyle Hotel. My guests and I were greeted at the door by white-gloved men in impeccable uniforms who showed us the way to the bar. Bemelmans Bar is so-named because its walls are decorated with artist Ludwig Bemelmans’ mural “Central Park,” featuring the much-loved Madeline and her classmates. The room centers around a grand piano, which was played by Chris Gillespie on this particular evening, and the staff is attentive and informed.

My waiter explained the cocktail menu in great detail before suggesting their famous Carlyle Punch. When I inquired as to the drink’s ingredients, he said it is made different nightly and its exact contents could not be shared, though he did point out it featured several fresh-squeezed fruit juices.

There is certainly an emphasis on fresh ingredients and craft bartending at Bemelmans. Don’t expect the bartender to fix you a drink in seconds—they will not be rushed. Instead, sit back and enjoy the show, as the skilled craftsmen work their magic.

Not surprisingly, the Carlyle Punch was delicious. It was superbly flavorful and tropical with Rum, fresh-squeezed fruit juices, bitters, triple sec (which always pairs well with fresh juice), grenadine and many more ingredients I couldn’t quite determine. Refreshing, crisp, and a little bit sweet, it was the perfect drink to end a wonderful day in New York. Hopefully it will not be long before I visit once again.

Just a few blocks away from the W Hotel is the Ava Lounge at 210 W 55th. Since a rain shower had just passed, I had no problem getting a seat on the rooftop lounge, though it filled up in a matter of minutes shortly-there-after. The views were great and the décor was trendy yet casual.

After reading an article about the recent rise of vegetable-based cocktails, I felt I had to give the “Cucumber Cooler” from their cocktail menu a try. The drink featured vodka with cucumber puree, mint, simple syrup, and sprite. It might not have been listed as one of the ingredients, but I swear there was a fair amount of black pepper thrown in there that I could have done without. Overall, it was rather refreshing; though I’d swap out the sprite for some club soda and a squeeze of lime (you’re already getting the sweetness from the simple syrup).

For a second round, I took my server’s suggestion and ordered the “Lemonade Stand,” with Citron vodka, muddled lemons, fresh lime juice, Sprite, and club soda. I find you can’t lose with a lemonade drink on a hot day, but I also enjoy a little more flavor in the mix. Try this one to quench your thirst:

Pour Schnapps and Triple Sec into a tumbler full of ice. Fill with lemonade and stir. Garnish with a lemon twist.

I recently attended the 2008 New York Bar Show to get a taste of some new products in the market. This year, the show was held at the Javits Center on W 34th, and featured brands from all over the world.

Not surprisingly, the show was dominated by vodkas (There had to be at least 20), each trying to stand out in the crowd. But it was the unconventional new brands that captured my interest. Castries Peanut Rum Cream, a blend of roasted peanuts, cream, and aged rum, sounded intriguing, but I was skeptical about how it would taste. I ended up being more-than-pleasantly surprised by the product (which is distilled in St. Lucia) and found myself imagining a delicious dessert drink—The Peanut Butter Cup:

Shake vigorously over ice and strain into a chilled martini glass. Garnish with chocolate shavings.

Leblon Cachaca was another product that caught my eye since Cachaca seems to be all the rage right now. I’m finding it on every new cocktail menu in classics like the Caipirinha, as well as replacing more traditional ingredients in drinks like the Baybreeze, Mojito, and Margarita. Try their twist on a Cosmo:

Shake vigorously over ice and strain into a frosted martini glass. Garnish with a raspberry.

Noticeably missing from the show: Absinthes (surprisingly, there was just one), and new-flavored liqueurs (no St. Germain or anything of the like). Ah, well, maybe next year…